How did a group of Ukrainian women, fleeing the war, end up in Karin's Bruers house? This has significance and our project is exactly about that.

Since the beginning of the war, more than 5 million Ukrainian women with children have sought a safe place outside of Ukraine. We: Vira, Oksana, Nastya, Artur, Dzvinka, Sofia and Olesya - found shelter, got a sense of care and security in Karin's house.

The war that began on February 24, 2022 or more precisely in 2014 - is still going on. You can say that Ukrainians have been resisting Russian onslaught for hundreds of years. In the designs we are going to use in this Social Sofa project, we intend to highlight women artists whose destinies, names, lives were stolen by the Soviet Union. As Ukrainian artists, they became famous only after the 1990s, when Ukraine regained its independence.

These women carried their identity through the totalitarian regime, through oppression and non-recognition. Oleksandra Exter, Hanna Sobachko, Kateryna Bilokur, Maria Pryimachenko, Sonya Delone, Alla Horska, Lyubov Panchenko are genius Ukrainian women. They were anonymous folk artists from the Soviet Union, or emigrants - who were acclaimed across the world except the USSR. The Independence of Ukraine allowed their names to be revived and we were finally able to get acquainted with their art. Women who are part of our project are as vibrant as their paints. They possess subtle yet powerful energy - they’re confident and bold. This project is about life, which is being awakened in spite of everything - it is powerful in a new way and it depicts the truth.

A woman is a creator who carries the genetic code to her children and into her art. She is the definition of rebirth. Our project is about life, reconstruction, future dreams and hope, it symbolizes support, strength and resistance. We dedicate this to women who are at war and those who are holding the lines of support - who perform so many incomprehensible functions that they leave no chance for despair.

Our women are magical phoenixes who can make a ton of dumplings, organize truckloads of humanitarian aid, drop off sandbags to checkpoints, find unattainable bulletproof vests and helmets, drive dozens of vehicles for the military from Europe - and will go to bed tired. Despite that will wake up with renewed energy and will weave kilometers of camouflage nets, buy gas masks and turnstiles. They wake up daily and continue to hold the line, paint flowers around bullet holes at the gates, feed the refugees, and take care of their children and others. Because life must go on.

Our project is about life! When we put sofas in the recreation area, we tell people about the history of women in art - it's just about prosperity, rebirth, stability. It's about a bold choice and the future.

You can find more information about the Artists & the Designs here. Ukraine-and-Socialsofa.pdf 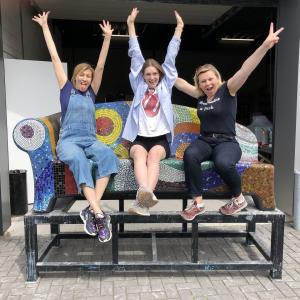