The organization of the WensAmbulance Brabant is solid. They make 750 rides a year with people who are often already bedridden and seriously ill, and who want to see their wishes come true. Like a ride to the Zoete Lieve Moeder in the Sint Jan in Den Bosch, or a trip to the beach in Scheveningen, or a wedding of a grandchild. Then the volunteers bring those people to their destination for an unforgettable moment in their lives.
The club was founded in 2011 by Frans van Gerven and Giel van Genugten and has grown into an organisation with five locations. One in Boxtel, one in Valkenswaard, one in Helmond, one in Bergen op Zoom and one in Breda. With 160 volunteers, 60 drivers and 100 nurses. Last year, WensAmbulance Brabant would have liked to celebrate their anniversary, but corona happened.
Social Sofa
That's why this year we are celebrating ten years of the WensAmbulance", says Barry van Brakel who is active for the WensAmbulance in Boxtel. ,,Through relationships and sponsors we were able to gather some money. And so the idea arose to leave a nice 'heavy' gift of over 2000 kilos for the community. We wanted to make a special sofa following the example of what Karin Bruers once created. A Social Sofa that brings people together."
And so Barry van Brakel, his wife Annemarie, Albert and Karin van Maasakkers and Riny van den Donk set to work. ,,In our son's workshop", says Van Brakel. There was room and a warm stove to do the work during corona time. We used at least 25,000 mosaic pieces to stick the image of the WensAmbulance on the sofa."
But then one of the volunteers Riny van den Donk suddenly fell ill. ,,That was just about the time that one of Karin Bruers' employees came to wash in the stones with a special two-component grout. This prevents water from running between the pebbles and ensures that they remain in place for a long time. We picked up Riny with the WensAmbulance. That way he could be there on a stretcher when the bench was being made ready.”
There was still some discussion about the location of the WishAmbulance sofa. Some wanted it in Valkenswaard, because that is where the organisation was founded. But others thought that the bench should be in the capital of Brabant. We eventually found a very nice spot where it can be used a lot and where it is in the spotlight: at the entrance to the Jeroen Bosch Hospital in Den Bosch."
Minibank
In order to think of Valkenswaard as well, the group of volunteers made a nice little souvenir. Through the company Infolio in Boxtel we managed to get a miniature sofa made. It now gets a spot at the Wish Ambulance in Valkenswaard."
Source: Brabants Dagblad, Domien van der Meijden
Date: 15 July 2022 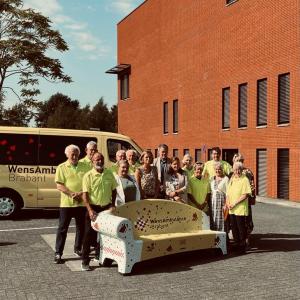